Posted by Ballymoney By The Sea

Over 150 people had a fresh start to 2023 when they took the plunge in Ballymoney for the annual Tara Vale Swimmers charity swim.

This year marked the group’s 18th annual New Year’s Day swim at North Beach Ballymoney and it proved to be one of the biggest to date. According to organiser, Rob Spencer, the event was a huge success from start to finish.

“It couldn’t have gone any better. We were very lucky with the weather and even had a bit of sun on the day,” he said. “I think it was probably our biggest crowd so far. It seems to be growing every year. There was about 150 people there and about 500 more watching. It is a great, positive way for people to start the year.”

The fun continued afterwards in The Tara Vale, where participants warmed up while enjoying musical entertainment from Vapour Trail. A large crowd also arrived to cheer on local man Nick Redmond, who said farewell to the long locks and beard he grew through the pandemic by participating in a charity shave. Through his transformation, Nick raised approximately €3,000, all of which will be added to the total amount raised through the New Year’s Day swim.

Organisers of the swim took the time on the day to show their gratitude for the annual support of Courtown RNLI, particularly Sam Kennedy who recently retired as Lifeboat Operations Manager with Courtown RNLI.

“Apart from anything else, Sam is a gentleman but he was also a brilliant person to work with over the 18 years of the swim. He gave us a lot of support,” said Rob.

Aside from being an enjoyable community event, the annual New Year’s Day Swim is aimed at raising funds for The Jack and Jill Foundation, North Wexford Hospice Homecare, Saint Aidan’s Services and the RNLI. With money still rolling in, The Tara Vale Swimmers have yet to confirm the total amount raised, said Rob.

“We raised about €5,000 on the day but that’s only going to be a snapshot because we still have a load of sponsorship cards out. Usually we have close to a full figure at the end of January and make a presentation to the charities at the beginning of February.”

On behalf of the Tara Vale Swimmers, Rob wishes to thank all of the businesses and local individuals who supported the recent swim.

“This year’s swim was a real day of giving.”

The annual Tara Vale Swimmers swim was set up by a small group of friends who wanted to start each year in a positive way by having a charity swim with a social event afterwards. To date, they have raised almost €215,000 for charities.

This article first appeared in the ‘Gorey Guardian’ see here 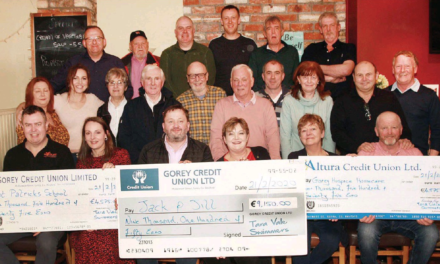