Our second most recent shipwreck in Ballymoney was the Isallt. It was shipwrecked on 7th December 1947. There were seven onboard, three were drowned, two saved, and another two, whose destinies remain unknown to this today, the Captain and first Mate, the body of the lady passenger, whose presence on the ship seems, at least, to be unusual, was washed ashore at Courtown two days later.

The Isallt was the only ship to leave Dublin port on 4 th December, bad weather having been forecasted and a question remains whether it’s supposed cargo of manure was destined for Waterford or whether she was bound for The Caribbean. A Derryman, Captain Charles McGuinness acquired the nickname “Nomad”, probably self-named. He wrote many stories about his travels and exploits, some of which would have to be taken with a pinch of salt. However, he had a fascinating life and the following is merely a synopsis taken from the book “Charles “Nomad” McGuinness”

Here is the preface to the book:- “ Charles “Nomad” McGuinness”
Being a True Account of The Amazing Adventures of a Derryman, Pirate, IRA man, Gun Runner, Polar Explorer, Adventurer, Mercenary, Rogue, Escaper and Hero. He was married (at least) twice, first time in Berlin in 1922 to a Polish woman, Klara Zuckerkandel, who came to be known as Claire. They had one son, Patrick, and Nomad abandoned them in New York to set off on one of his travels. He is rumoured to have married another woman in Panama, by the name of Anita, but he did arrive back in Derry in 1947, with another Anita, a young Irish woman and their baby daughter. We are also led to believe he was married to another Irish woman, named Maureen. There is speculation that he took later “wives” in both Fiji and/or Tahiti after the wreck of The Isallt, if he actually did survive the shipwreck. He had a much earlier love affair in the Fiji’s and is said to have broken the young lady’s heart, when he disappeared overnight. The first major account of McGuinness has to do with his involvement with the IRA and the 1916 rising, fighting in skirmishes, being jailed, breaking out of jail, but, and, in particular, gun running. He is said to have brought over 90% of all guns and munitions into Ireland for the IRA, many sourced in Germany.

Charles got bored very easily and had a permanent hankering for adventure, to travel and be at sea. He worked in the British navy, returned for the Irish Rising, fought in The Spanish civil war (both sides), he went on explorations, both to the Arctic and Antarctic. He did rum running during the prohibition years in America, dived for pearls in the South seas, trained and helped Chinese pirates,worked with German spies, crewed on and skippered many ships, survived a number of shipwrecks, drank heavily and was jailed several times all over the World following drunken brawls.

So the question remains:- Did he survive the wreck of The Isallt?
The story goes:-

A nephew of his claimed that in 1955, eight years after McGuinness had supposedly drowned, (off the Isallt) he had been in London and was going down the Tottenham Court Road underground escalator. He swears coming up and passing him was “Uncle Nomad”, who smiled at him and just said “you never saw me”. By the time the nephew had reached the bottom and chased up after the man he had disappeared.

The Author’s final remarks are:-
“At the end of the day, we find it hard to believe that Charles “Nomad” McGuinness died for a shipload of manure! But, as yet, we can’t prove it. Any information gratefully received………” 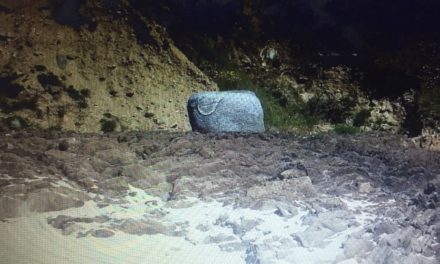