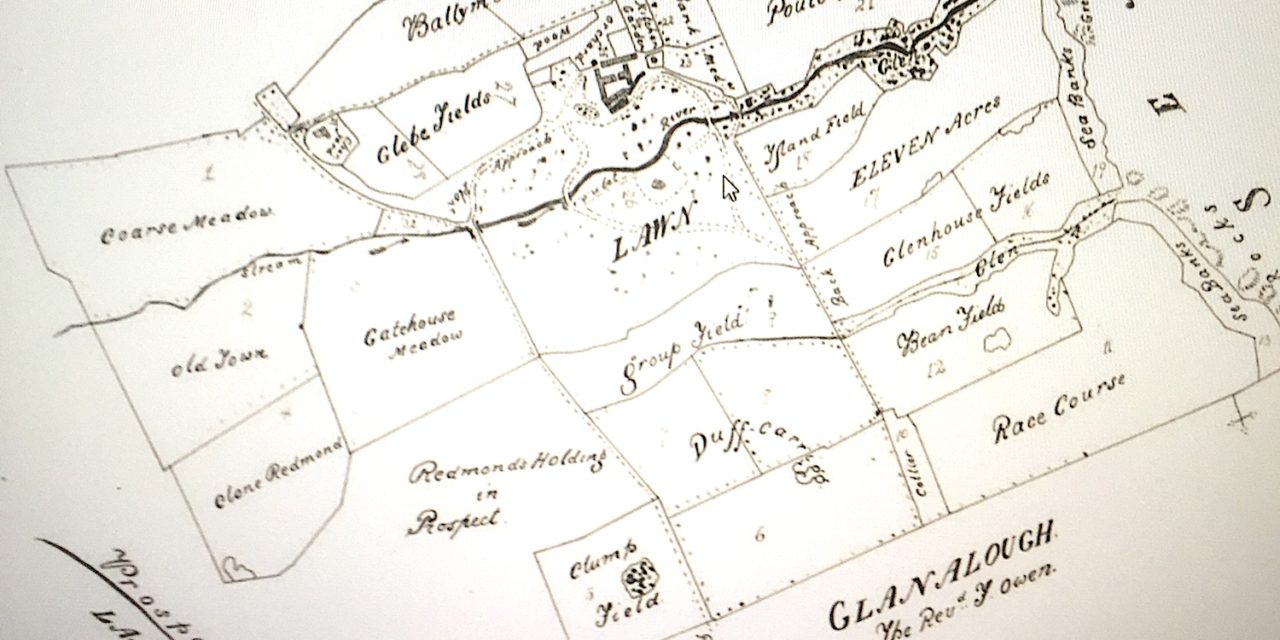 In 1611 James 1 st granted Sir Edward the townlands of Tara Hill, Kildermot, Ballymoney and Courtown including the river of Ounavarra and Tara Hill itself and all the lands in between, estimated at circa 1,500 acres. For all this he had to render yearly to his Majesty and his successors 8 Pounds.

Sir Edward entered his lands with the help of the Sheriff of Wexford in May 1613, by breaking down doors of those who resided there and turning them out. Sir Edward set about building his house without delay. As part of the Plantation conditions of those with 1,500 acres or more was to build a castle or stone house measuring more than 30’ by 24’ and 30’ high with battlements and to be built within four years. This castle was built of red brick, stone and slate. It is shown on the map of the Barony of Gorey as a Tower house with battlements that had a fine view of Tara Hill and surrounded by a wall 110’ by 72’. The house was known as the Castle of Prospect.

Sir Edward also built a residence close to Dublin in the Phoenix Park. It later became a vice regal lodge, this site was later occupied by the magazine fort. There were houses to the north and south of Prospect Castle in the field known as “Old Town”.

When ploughing in 1938, 1966 and 2010 bricks, stones, slates, several bits of pottery and evidence of population were discovered. A church was also built around the same time on the site now occupied by Prospect graveyard. Church records show that in 1615, the church was in good repair and the Rector was Rev. Matthew Lee. There were also several traders there including John Todd, a clothier, in 1641. There was a forge and a pound in 1840 and it continued in use up to a much later date. It was situated at the north west side of the graveyard. The last blacksmith to work the forge was a Mr George Davis until the late 1950’s/early 1960’s. The forge was situated in almost the same position where the house of like name is situated today.

Sir Edward was elected to Parliament in 1613 and nominated as Burger of Gorey in 1619. On 27 th November 1627 some alarm was caused to the residents of the district by the then appearance of a great number of ships off the coast. Fisher was absent but on his return to his castle at Prospect he was informed of the event by two of his tenants named Hinchley. They reported approximately 50 ships. Rumours of an invasion from Spain were current at the time and hence the anxiety of the residents. It was subsequently surmised that the storm on the previous night might have driven the fleet off course. A report was sent by Fisher to Lord Esmonde, Governor of Duncannon Fort, who was staying at his estate at Limerick (Kilanerin), near Gorey. Sir Edward died in 1631 and the estate passed to his fifth daughter, who married Sir Edward Chichester. His eldest daughter married Sir Walshingham Cooke, who lived at Courtown and was High Sheriff of Wexford in 1630. 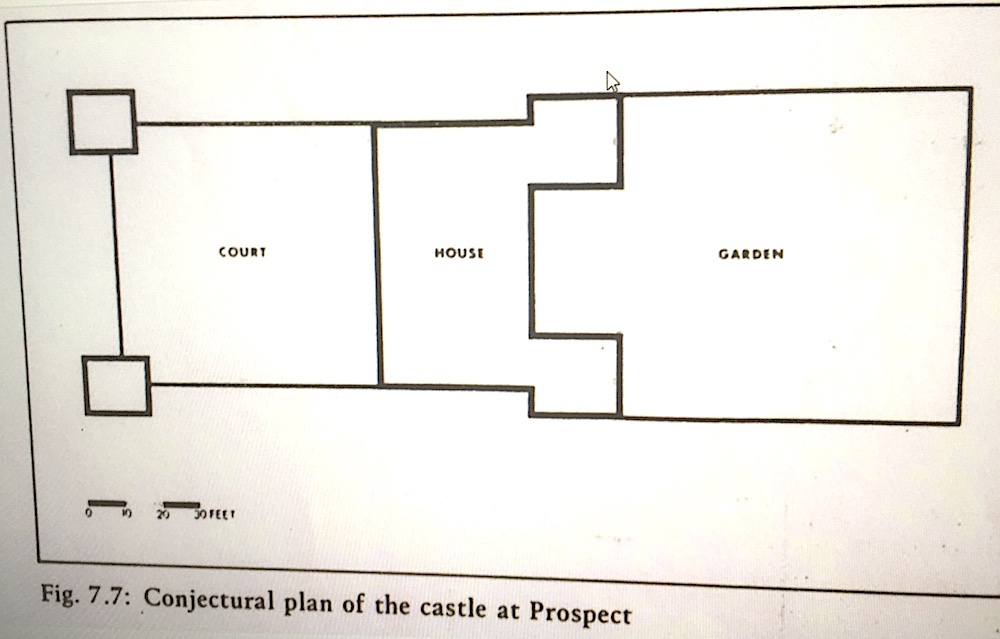 The castle was partially destroyed in 1641 when “the pent-up fury of the disposed broke like a storm across the land”. In 1654 the castle was shown on the “Down Survey” as decayed. In 1659 the population of Prospect consisted of 18 Englishmen and 44 Irishmen.

The estate passed in 1711 from John Chichester to James Stopford, the father of the 1 st Earl of Courtown. In 1769 a new church was built on the Courtown Demesne, Kiltennel Church. A part of the wall of the old church at Prospect was standing in 1878 and contained a stone on which was sculpted the Arms of Sir Edward Fisher.

The site of Prospect Castle is situated in the field known as “Coarse Meadow” on the lands known today as “Prospect House and Farm”. There still stands the remains of a stone cottage and bridge over the stream which was the toll house and bridge near the castle on the old road to Gorey. The old road ran from the Coastguard Station in Ballymoney through Prospect, coming out at Clonattin. The present Prospect house was built circa 1830 for one of his valued stewards or workers, probably Benjamin Godkin or Samuel Binnions. There is a ghost of a child that still walks the hallways of Prospect House, to this day, and has been seen by several people over the years.